John French answers your questions from 2000/1

In 2000 John French, aka Drumbo, was writing his account of his time in the Magic Band, Beefheart: Through The Eyes Of Magic.

The author called on Radar Station visitors to send him their questions and suggestions for the book, to ensure that he included the details that you wanted to know. Many of you responded to this appeal and John French passed on his sincere thanks.

Many of the questions were of a very specific nature and couldn’t be easily covered in the format of a biographical book. Since they were also very interesting questions well worth addressing, John suggested that his answers could be made available at the Radar Station as a preview to the book.

True to his word, here they are: 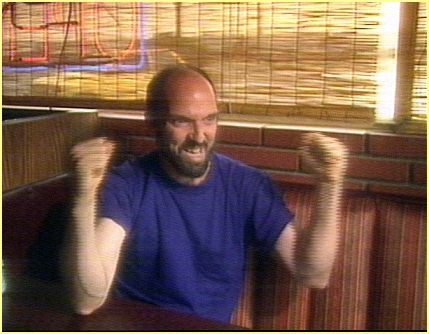 The pictures on this page are stills from the BBC documentary The Artist Formerly Known As Captain Beefheart. John French writes:

This interview was done at Whites Cafe in Mojave, where Don’s parents used to take him as a child. He drove up there all the time in the seventies and early eighties when he lived here. I think it was a nostalgic look at his childhood. He may have grieved the loss of his father more than he cared to admit. I recently drove up to Mojave to go to Whites, in search of my own nostalgia, and was saddened to find that the restaurant, a local landmark, had been recently demolished.