This release, Vault Package #36, by Jack White’s Third Man Records has caused a bit of a buzz amongst fans not least because of the way it had to be pre-ordered on subscription via the label’s website and at $60 it was not cheap. Understandably the cost put many people off but plenty more battled with the website and signed up for it. 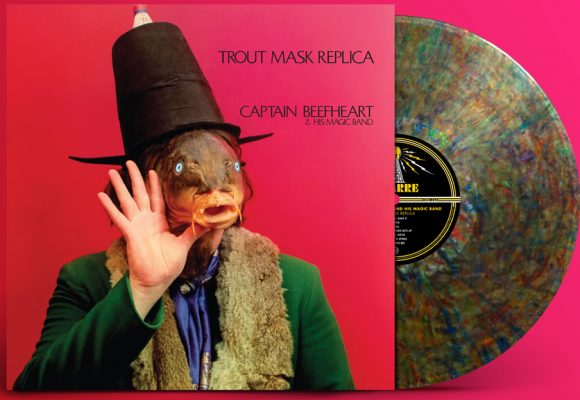 In full partnership with the Zappa Family Trust and to celebrate the relaunch of the seminal Bizarre label imprint, Third Man Records is proud to announce its 36th Vault package focused squarely on Captain Beefheart and the Magic Band’s Trout Mask Replica.

Out of print on vinyl for nearly ten years, this remaster was helmed by industry legend Bob Ludwig and cut by the estimable Chris Bellman at Bernie Grundman Mastering. Utilizing crystalline-quality safety masters kept in the Zappa family vault for decades by the trustworthy Joe Travers, the audio here is positively glorious. Every last skronk breathes full life into the room. Every twisted guitar figure uncurls onto paths previously unpaved. Every last bark and howl shines resolute through the vast emptiness of your mind.

Eventually shipped at the end of June 2018 this was a satisfying heavy package when it arrived. But what of the contents?

Third Man Records seem to be keen on merchandising so even this release comes with several pieces of ‘merchandise’. Yes, I’ve put that word in quotation marks because I’m not convinced by these extras but then I am an old cynic.

Plus there’s a double-sided card listing all the contents of the package and the blurb about it as included on the website and in other promo material.

So, those are the extra bits that fill out the package. Nice enough but I could live without them.

Before taking a closer look at the Trout Mask album itself there is one other extra item to assess – a facsimile copy of the Pachuco Cadaver / Wild Life single. Now this knocks all the other ‘merchandise’ into the proverbial cocked hat. Much sought after by collectors this single featuring two tracks from the Trout Mask album was only released in France in 1970 and has a stunning photo of Don and Bill Harkleroad on stage at the Amougies Festival. Okay this isn’t an original and it isn’t an exact facsimile but it’s still nice to have and the pure white vinyl looks cool. 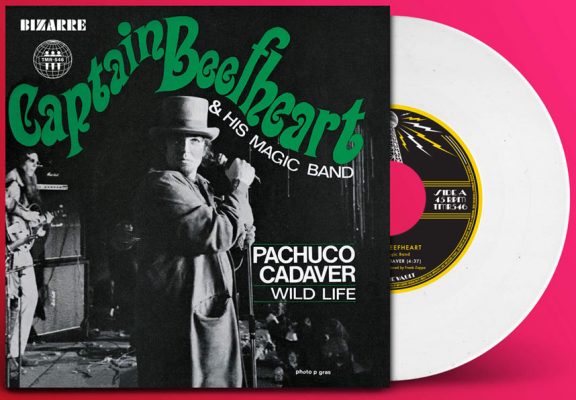 Let’s now move on to the meat of the package…

The album cover is a wonder to behold. Bright and shiny with crisp colours it is beautifully printed on good quality card. The best looking version of the cover so far. It’s an old friend that has an a sympathetic makeover! Beefheart collector Paul Dickinson was able to provide the original cover photo which is why the front cover in particular looks so good.

I’m pleased to say the lyric sheet is included which is something that was missing from the original UK release and most other releases since 1969.

The vinyl itself looks amazing. I think the idea was for it to look like fish scales – it’s described as fruitcake fish-scale – but it’s more like paint trails and daubs which is just as appropriate. Although it does look weird without a Straight label even if it does come under the Bizarre imprint. The discs are pressed side one/side two and side three/side four.

And the sound? Well, this is pressed from the 2012 remastered version that was originally only issued on CD by by the Zappa Family Trust. The remaster by Bob Ludwig is a great subtle job of cleaning up the sound so all the elements of each song are more distinct with the drums and bass being given a little more prominence. The overall sound of the album hasn’t been botched or abused for the mp3 generation. It sounds mighty fine. As this comes from the same source tapes as the CD release there are minor issues with two songs, Frownland and Hair Pie: Bake Two, due to damage to the original master tapes but this doesn’t spoil the enjoyment of the album at all.

If you want a vinyl version of Trout Mask Replica then, at the time of writing, this is the best one. Unfortunately, if you missed out getting this direct from Third Man Records copies will only now be available on ebay at grossly inflated prices from those who did buy purely to sell on at a profit. Hopefully a more accessible release of this remaster will appear sometime, maybe for the album’s 50th anniversary.

A couple of other items of note:

Drumbo is included in the list of band members, Hurrah!!!

In small print on the back of the album and on the lyric sheet there is reference to a new website – www.captainbeefheart.com (not to be confused with our own fair site) – which currently has no content but allows you to sign up for ‘news and updates’. I believe it has been set up by the Zappa Family Trust but what is its purpose? Intriguing …