Picture This by Jonathan Morris

By: Graham
In: Art articles, Stand Up To Be Discontinued
Tagged: Hyper, Jonathan Morris
With: 0 Comments

[alert_box type=”info”]This article originally appeared in Hyper, September 1994 to announce the arrival of Stand Up To Be Discontinued in Brighton.[/alert_box] 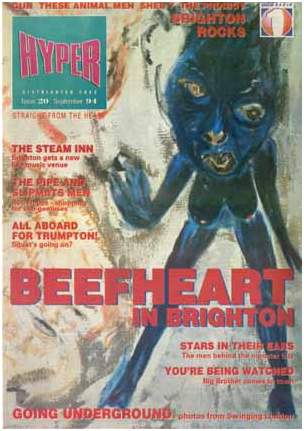 This month Brighton Museum is staging two of the most exciting exhibitions seen in the town for years. Underground London and Stand Up To Be Discontinued bring the photos of Robert Whitaker and the art of Don Van Vliet (Captain Beefheart) to the museum at the same time. You lucky people.
BRIGHTON Museum celebrates the work of one of rock’s most extraordinary and enduring artists, Captain Beefheart, from September 2. Alongside the rock memorabilia will be the first ever UK exhibition of his paintings which have established him as one of the finest of contemporary expressionist artists.

DON van Vliet, aka Captain Beefheart, last made a record in 1982. Yet his music is still influencing the youth of today, as it did in the Sixties, when he cut his first record.

Bands like PJ Harvey, Truman’s Water and Throwing Muses are all created from the Beefheart mould. Before them it was Pere Ubu, who ripped him off completely, Television and Public Image. But while his influence on music continues, the Captain is carving a new niche as an internationally respected painter under his real name Don van Vliet. Oils and canvas have replaced the guitar and amplifier and he’s doing very well, thank you. Paintings sell for up to £50,000 each and he is now one of the most collected living artists. For van Vliet, it’s a return to an artistic medium that first flourished as a child. He was ‘discovered’ at the age of three sitting inside a lion’s den of a zoo making sculptures of the animals.

Antonio Rodriguez, the Portuguese artist who found him, was so impressed by the child’s talent that van Vliet was given a weekly ‘sculpture slot’ on his local television show. By the age of 11, van Vet was lecturing at a nearby Art Institute. At school, van Vliet immersed himself in blues and jazz and with his friend Frank Zappa formed a group in 1964 to make a film musical called Captain Beefheart Meets The Grunt people.

So emerged one of the most extraordinary personalities of avant- garde rock music, with Captain Beefheart and his Magic Band producing some of the most challenging and compelling recordings of the era.

Although Beefheart made his last record in 1982, the idiosyncratic and uncompromising power of records such as Safe As Milk (1967) and Trout Mask Replica (1969) continues to resonate through much of today’s alternative rock.

As John Peel says: “Captain Beefheart has been at the core of music that has stirred and excited me. Echoes of his work are heard in every radio programme I do.” For the last two decades, van Vliet has focused almost exclusively on fine art as the most suitable channel for articulating his unique vision.

Building on the American Abstract Expressionist tradition of Rauschenberg and Jasper Johns, van Vliet has produced art with graffiti-like scrawls and signs that reveal a highly intuitive and emotional creative spirit.

For six years he lived in a trailer in the Mojave Desert before moving more recently to Trinidad, near Oregon on the northern Californian coast.

His vibrant expressionist oils and watercolours reflect these landscapes and his works have been exhibited in major galleries across the United States and Europe.

Brighton Library is a place of hushed silence, wood panelled walls and serious study. But for two months from September, it will be a crucible of rock ‘n’ roll. Psychedelic posters from the Sixties, videos of rock performances that made the Rolling Stones look like puppies, and general weirdness will reign.

“I would hope that the people that come would not be the normal kind of people that stroll round museums,” said David Breuer of the museum. “Captain Beefheart is an extremely unusual character, and I thought it would be nice to have something absolutely eccentric, weird and avant-garde and something quite accessible to a cross-section of people.”

There are two sides to the exhibition, Don van Vliet – The Painting and Captain Beefheart -The Music, under the title of Stand Up To Be Discontinued. It will be more interesting because of the rock angle,” said David. “It’s better than just looking at looking at loads of pictures that you cannot tell which way round they are.”

David said he was keen to put on an exhibition of a non-British international artist and van Vliet, who has only had two exhibitions in London before, seemed an ideal choice. David said that the two aspects to the exhibition compliment each other.

“People who are fans of his music will understand the paintings better than people that only know about modern art. There is a similar rhythm in the painting as his music.”

The exhibitions will be complimented by a book of the man’s life and work, together with a CD of van Vliet reading his poetry.

David enjoyed researching for the exhibition. He said, “If you put on an art exhibition you get sniffy people, but this bunch seem to be nice and interested and are really looking forward to it.”