Gary Lucas on Doc At The Radar Station

And here is NO. 5:
which brings us to the album that brought me strictly personal into the madcap world of Don Van Vliet, and that would be 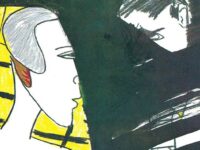 –the superlative album issuing forth Athena-like from the head of Don once the smoke had cleared from yet another one in a series of seemingly endless legal kerfuffles for our protagonist / agonist…an album which saw Don special thank-ing disbarred San Francisco attorney Brian Rohan on the back cover for helping to extricate him from a lawsuit between Virgin and Warner Brothers Records–who, after giving Don the old heave-ho after “Clear Spot”‘s failure to launch had actually RE-SIGNED Don for “Shiny Beast” (after two misfires on Mercury Records and the album-in-bondage that became “Bat Chain Puller”)– this in direct contradiction of an exclusive worldwide contract Don had already signed with Virgin (when Richard Branson first set up shop in England he almost immediately announced to the press his intention to sign both Zappa and Beefheart). So there was an injunction to prevent Don from recording until this beef between Virgin and Warners was worked out. Eventually Warners folded and Virgin won out, retaining exclusive rights to Don’s recording services. (Have I confused you enough here? Not surprising, as it goes with the Beefheart territory).

Anywho, this is where I, one of Don’s true-est believers, come into the Beefheart picture. I’d met him back in 1971 when he came up to Yale to play, written about him for Zoo World Magazine, proselytized the heck out of him to anyone within ear-shot, and stayed abreast of the teat (another Don-ism) as it were, secretly studying his guitar parts (I’d been playing since age 9, but hadn’t bothered to tell him about this–I didn’t think I was good enough to apply for the gig for a long time, quite honestly)–until one fateful night after a Zappa/ Beefheart concert in Boston in 1975, when Don auditioned me in his hotel room and told me we’d be doing something together–eventually in late 1979 I got the nod from him to special guest on “Doc” in the form of re-recording John French’s guitar solo piece “Flavor Bud Living” from the deep-sixed “Puller” album–a rather languid affair in the original version– but this time around Don instructed me to apply his “Exploding Note Theory” in re-imagining his composition, which basically boiled down to his dictum: “Play each note as if it bore no relationship to the previous or the subsequent notes”. Kind of a staccato, fragmented, ack-ack type of attack. Which I did in late May 1980 up at Sound Castle Studios in Glendale (quite near where Don was born in fact, on January 15th 1941, now MLK Day), which, until we got in there, almost exclusively was devoted (heheh) to recording religious music of the Christian persuasion. I flew in from NYC, took a cab from LAX directly to the studio, and was hustled almost immediately inside by Don and his cousin Victor (The Mascara Snake), where I sat and delivered my revved-up version of “Flavor Bud” to Don and Glenn Kolotkin at the board in one maybe two takes, max. Right before I recorded Don handed me a note of instructions which he’d ripped from a Western Exterminators notepad he found in the front room of the studio. On the sheaf from the pad was a printed cartoon of a top-hatted old geezer coming down hard on the head of a hapless mouse with an oversize wooden mallet. Don had put a big red magic marker ink blotch over the point of mallet-mouse impact and had written out for me in long-hand his instructions: “Play like you dyed.” (his spelling).

The first take was chosen (“first thought, best thought”–Allen Ginsberg), and then it was my turn to relax, hang out with the guys (Jeff Moris Tepper on guitar, Eric Drew Feldman on bass and keys, John French on drums and guitar, Robert “Wait For Me” Williams on drums, and Bruce Fowler on trombone). I recall meeting and hanging out also with Don’s longtime friend and supporter Ace Farren Ford in the studio parking lot. I also recall an actual California circuit court judge/ Friend of Don’s showing up with his girlfriend the following day to kibbitz with Don, who cajoled the guy into putting on his actual judge’s robes for our general amusement until the three of them went off for a protracted private colloquy / party of special things to do…I heard some incredible music being made over several days there including the building up of the track for “Run Paint Run Run”, with Don hearing a squeak in the wood-paneled control room on one playback at ear-shattering volume, and instructing Glenn Kolotkin to mic up the squeak and add it into the mix.

I recall Don rocking back and forth in his chair to the rhythm of the “Paint” playback music, telling me how he had utilized “the Baby Beat” in this song (“the rhythm I recall rocking back and forth to in my bassinet”…Don was quite the big overgrown baby, one nice but still extremely demanding side of his very complicated persona). Anyway the album came out that fall to general rave reviews as perhaps THE best Beefheart come-back album of them all (there were a few of these), and my ex-wife Ling and I had a whole bunch of rock writers over to our apartment that summer for listening sessions–including the great Lester Bangs, who after hearing “Flavor Bud Living” asked me in all seriousness: “Which part did you play on this, Gary? The top or the bottom?” “Lester,” I replied, “that’s all me, in real time.” Indirectly, Lester had paid me the highest compliment of my life at the time re my playing. That particular solo piece put me on the Guitar Map as it were, it was my first step-up-to-the plate on a (sort of) major label, and it was duly noted and remarked on in places like “Rolling Stone”.

But it’s only one moment on a real firecracker of an album, a veritable Vesuvian Roman Candle of challenging, explosive, gritty neo-punkish grit and eerie prog-ish mellotron setting off the highest and airiest Van Vliet wit, with some of Don’s best aperçus sprinkled throughout (“Send your mother home your navel”…”Make invalids out of Supermen” et al). From the dysfunctional couple on the cover painting (rendered in yellow and black, Don’s favorite color combo) to the last mad utterance of “Making Love to a Vampire with a Monkey on My Knee” (“Oh fuck my brain / fuck that poem!”), it is a totally compelling and superbly rendered and recorded Stagecoach to Hell and Back, with every choreographed nightmare in place.

There are only several hints of redemption, the best coming in the form of my favorite track “Sheriff of Hong Kong”, for which my ex-wife Ling and I gifted Don with a pair of Beijing opera gongs which he plays on the track (he danced around them during the recording, and if you listen closely at one point hit them so hard with his ahem mallet that one fell off the jerry-rigged stand and can be heard crashing and wobbling on the floor). Derived from a piano tape of Don playing his composition “Tight Kite Blues”, this track features the great John French superbly beating out the polyrhythms as Don lustily howls some Mandarin phrases I taught him (“Wo ai ni, shaujieh!”– I love you, young lady). Don was a Sinophile (his mother Sue had once astutely remarked after hearing “Trout Mask Replica”: “Your music sounds kinda Chinese-y, Don”) and here he gives his five and a half octave all to this tall tale set in the wild west of old Hong Kong, where “She goes up in a flash / I bite the end of her sash / and we’re Long, Long Gone / to Hong Kong Kong”…there’s so much more I could tell you about That Guy, and This Album, but later for that as I’m plumb tuckered out as I’m sure you are as well, so I’m signing off for now until next time–happy trails and thanks for listening!