By: Graham
In: By or about Don Van Vliet
Tagged: Ben Cruikshank, Ken Brooks
With: 0 Comments

[alert_box type=”info”]A legendarily poor attempt at telling the Beefheart story through the analysis of all his released songs.[/alert_box] 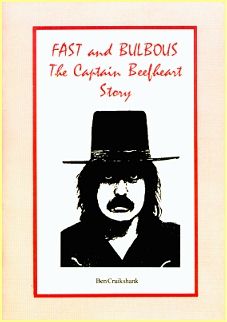 The enduring story of an innovator, an artist in oils, a sculptor in soap, a poet, and a creative musician. Don Van Vliet was to change his name to Captain Beefheart and then invent by altering the blues, a new modern music.

A cult following which paralleled the music of his good friend Frank Zappa, with whom he wrote a screen-play in their high school days.

Relinquishing the music business from where he experienced problems both with his music and the inability to obtain adequate recompense for his work he took a new direction into painting, where at last he received the accolades of the intellectuals.

The story of Don Vliet to Captain Beefheart and back to Don Van Vliet, a journey always interesting, sometimes amusing the story of an aesthetic innovator who finally achieved his success and sublime happiness.

Put very simply, this book is a disgrace. Fast & Bulbous does not tell the Captain Beefheart story in any shape or form, preferring to simply pass meagre comment on all Don Van Vliet’s released songs, much of which is glaringly incorrect or shockingly feeble-minded. I have to wonder why anyone would bother to write or publish such an utterly worthless slice of crud in the first place.

At other times, the commentary is banal to the point of being moronic; we are told little more about “I Love You You Big Dummy” other than that it contains “only a few lyrics and they seem to be nonsensical” and that “the second ‘You’ in the title is not in the song’s lyrics.” Thanks for that insight, Ben.

Cruikshank has minimal understanding of the music and absolutely nothing of interest to say about it. Certain passages of this book are horribly reminiscent of the sort of comments every Beefheart fan has heard a million times from the unbelievers. In the three-line commentary about “One Red Rose That I Mean”, he claims that it is “the poorest track, an instrumental filler, solo guitar, can this really be written down before playing? The playing is pedestrian, and they may be just tuning up.”

The bad grammar and sentence structure don’t help either, making this book an infuriating read simply because the author doesn’t elucidate the few ideas he has in a readable or straightforward way. Even the synopsis quoted above doesn’t contain one single properly constructed sentence. I happen to believe that these things should matter to a person writing anything that he or she wants others to bother to read.

The few examples that I have quoted here are not the exceptions, the book is riddled with such colourless claptrap. I have just opened the book at a random page and picked a random song, “Sam With The Showing Scalp Flat Top”. Quoting the full commentary for this song, Cruickshank tells us:

[wp_quote]”written by the Captain, the lyrics written so many years earlier. A spoken poem with musical twiddlings as a back-drop. Captain’s esoteric word play, and this track includes the album title in the last few lines. The sentiments are that Sam is a basket case with a very strange hair style.”[/wp_quote]

No one needs to pay £5.99 to read such ineffectual, shabby inanities. Criticising this book makes me feel like a bully because it is simply all to easy.

Steal it and burn it or just avoid at all costs.

Take my advice and don’t bother but if you want to do it for a dare then:

There are an infinte number of more useful things you can do with £5.99