A look at the November 2022 Record Store Day release of a double vinyl set to celebrate the 50th Anniversary of the Clear Spot album. 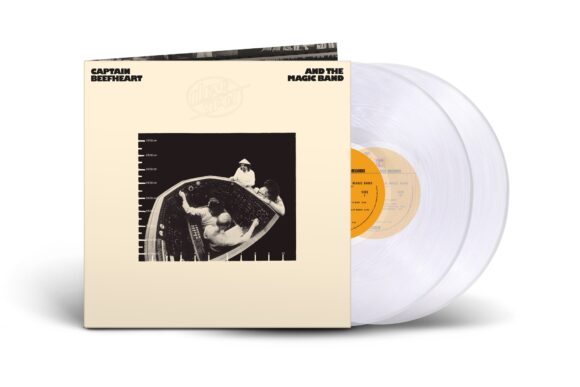 Sides 1 and 2 as to be expected are the same as the original release.

It goes without saying (but I’ll say it anyway) Clear Spot is one of Don’s best albums, in many ways due to the production by Ted Templeman and is a great introduction the band if you need to convert a non-believer. This review is not about the original album but about this particular package released as part of the 2022 Record Store Day catalogue.

This Record Store Day release is limited to 4500 copies (this may be the number for the US only or may include  the 1000 for the UK, or not, the publicity is not clear). At the time of writing there has been no indication whether CD or download versions will be available.

The album packaging is a good solid gatefold sleeve with the album title embossed on the front top centre. No clear plastic sleeve as per the original release though. However, as a nod to Don’s original concept both of the discs have been pressed on clear vinyl – and pretty good they look too. No additional information is included apart from the recording dates for the extra tracks on the second disc. Inside the gatefold are reproductions of photographs taken of the band in Amigo Studios during the recording of the album (see lower down the page). These are great and are easier to see here than when they were included in the Sun Zoom Spark booklet.

The real ripple of excitement for fans this release caused was the news of the inclusion of an additional disc of outtakes. We know there are plenty of tracks from this period in the archives so hopes were high.

Well, those hopes have taken a bit of a battering because Rhino/Warner have only managed to include seven  tracks which have been previously unreleased, the other five were on the outtakes disc issued as part of the Sun Zoom Spark boxset.  This is pathetic to say the least! Again, a major label shows that they do not really consider the fans. Yes, it’s great to have these additional tracks finally legitimately available but there could so easily have been more – what about the nine minute slow version of ‘Circumstances’ for instance (even if it was recorded during the Spotlight Kid sessions)!

The unreleased tracks are:

As you see they’re all instrumental versions, so no new Don vocals to enjoy, but you can wallow in the cool playing of this really tight band, especially on the tour de force that is Big Eyed Beans From Venus!

So, what does this new version sound like? I listened to one side and then listened to my original 1971 copy for comparison – using headphones for both. For me, my original was the more comfortable listening experience. This new one was louder (seems to be the case with all “remasters” these days), there was a harshness to the sound that isn’t there on the 1971 vinyl and the bass seemed to be lacking somewhat. I’d be interested to hear what anyone else thought of the sound. (Note: I also listened to the Sun Zoom Spark vinyl version and, again this new one sounded harsher and with less bass although they’re from the same source).

Has anyone done a sound spectrum analysis of the original album and this new release and compared them?

Overall, this release, for me, is a bit of disappointment. A nice collectors’ item, yes, that looks really good but expensive for what it is when fans know it could have been better and could have included other outtakes that haven’t been officially released yet.