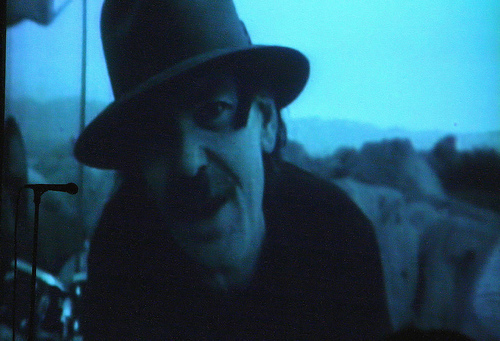 There was also a great promotional video for the title track of the final album, with its striking shots of  desert landscapes, Don’s paintings, tumbleweeds and the Magic Band earnestly miming with no leads connected to their guitars. Filmed on 7 August 1982 in the Mojave Desert, California. Directed by Don Van Vliet with Ken Schreiber; cinematography by Daniel Pearl (The Texas Chainsaw Massacre). The video, an uncommon concept at that time, was explained by Don as being a more favourable alternative to a promotional tour, leaving him free to get on with the rest of his life. Too weird for MTV at the time, it END_OF_DOCUMENT_TOKEN_TO_BE_REPLACED

Note this drawing depicting “…a small child / With Statue of Liberty doll.” which was included with the Spotlight Kid album in 1972, 10 years before “The Thousandth and Tenth Day of the Human Totem Pole” was released on Ice Cream For Crow. END_OF_DOCUMENT_TOKEN_TO_BE_REPLACED

[alert_box type=”info”]Originally appeared on Ice Cream For Crow[/alert_box] There’s so many things to feel and see while you’re awake they’re just out of reach out of grasp yeah out of reach and just as many; maybe more the minute that you sleep so I got to throw my preach skeleton breath scorpion blush I have a crush on your skeleton watch out unsuspecting stranger you’ll fall off the log headfirst into dreams end up screaming this will comb the wolf and that will comb the fog what will peen the rain what will preen the hog oh you mean earth and hell over you and END_OF_DOCUMENT_TOKEN_TO_BE_REPLACED

[alert_box type=”info”]Originally appeared on Ice Cream For Crow[/alert_box] Why, not even a rustler’d have anything to do with this branded bum steer world this pirate flag headlong disaster course vessel misguided charted this nautical numbskull hull sink in silence smoke – blow your chest out in hope sits spread-eagle on poor men piled high on truth mountain – last link in clarity’s chain you’ll not be thrown but dive and sink your pockets filled with earthly burdens when they could be filled with light and back with wings the sky is dark in daytime and still the blackbird’s beauty lyrics clean sing ye brothers and END_OF_DOCUMENT_TOKEN_TO_BE_REPLACED

[alert_box type=”info”]Originally appeared on Ice Cream For Crow[/alert_box] Hey Garland, I dig your tweed coat. I’ll trade you a domino this size, mothball-scented. The woman silk nude tie painting his chest. One celluloid stay exposed through his nibbled collar. Feet speckled the sidewalk. Faces gurgled through windows. Passing cars gum rubber streaks. Neon plants swim like green seaweed to a deep rhythm of blues. Red thyroid sunsets, flame in speckled chemistry. Pipes run off dark tubes. Erase into marks that pour the dye of darkness. Crystal comes together as silent as ink. “I don’t think I could let it go. I got it at the END_OF_DOCUMENT_TOKEN_TO_BE_REPLACED

[alert_box type=”cross”]Taken from November 1982’s Sweet Potato.[/alert_box] A premeditated Captain Beefheart album might seems a tad anachronistic to admirers of Cap’s staunch spontaneity and much of his new album is indeed of less-than-recent material. But the Beefheart bozos will be as relieved as I was when they slap this plentitude of typical warmth and depth onto their turntables. Yes, it is a masterpiece just as I predicted it would be and no, it matters not when Beef first composed these tunes. Even the ones dating back to the early seventies sound totally contemporary and would stand up in the best of company. There are only END_OF_DOCUMENT_TOKEN_TO_BE_REPLACED

[alert_box type=”info”]Taken from the October 1982 edition of Musician.[/alert_box] It happens every two or three years. Captain Beefheart, easily rock’s most abused underdog, after fifteen years of beating his head against fame’s door, issues another of his brilliant, confounding vinyl missives – vivid demanding documents of colliding technicolor imagery, exhausting primal rhythms divided into bizarre fractious and alien instrumental eloquence and the critics cry “Breakthrough! Hitsville! This is the one!” The rock comics’ oracle has predicted Beefheart’s commercial triumph so many times it’s no wonder the AOR mind-slaves dismiss it as the empty bluster of a few dozen typewriting malcontents. But just maybe this time END_OF_DOCUMENT_TOKEN_TO_BE_REPLACED

[alert_box type=”info”]Taken from the 22nd September 1982 edition of The New York Times.[/alert_box] Don Van Vliet, who is better known as Captain Beefheart, is still in the forefront of rock’s avant-garde, more than 15 years after the release of his first album. Although he has polished his music and changed the personnel of his Magic Band a number of times since the mid-1960’s, the broad outlines of his style were already in place the first time he entered a recording studio. They include fractured rhythms; dislocated country blues riffs; disjunct melodies and passages of counterpoint that sometimes recall Stravinsky; extravagantly gruff singing and croaking, and END_OF_DOCUMENT_TOKEN_TO_BE_REPLACED

[alert_box type=”info”]From Sounds September 1982[/alert_box] TO THE casual observer, Captain Beefheart’s vibe must appear to be similar to the window blind painting he has created to adorn his latest batch of surreal surface barking. It looks and sounds a blur, right? No. You’ve got to scratch deep down to relieve this particular musical itch. You’ve got to get some of that dark paint under your fingernails. ‘Captain Beefburger’, as our illustrious Ed mockingly refers to him, wallows deep and silent for years shrouded by his own notoriety and then without warning, emerges into the musical gloom, armed with tunes and words of earthy energy that END_OF_DOCUMENT_TOKEN_TO_BE_REPLACED 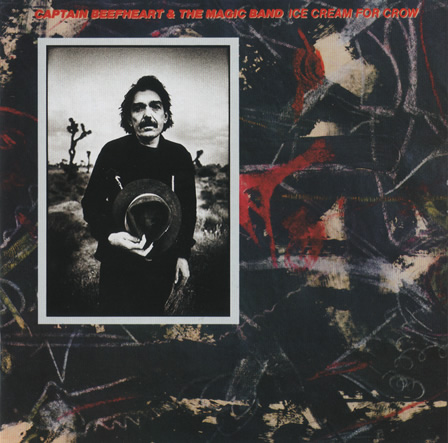 [alert_box type=”info”]Compiled by Jasper Leach. If you can help with any further info, please get in touch.[/alert_box] All songs (unless noted differently) Produced by Don Van Vliet Engineered by Phil Brown Recorded (mixed and mastered) at Warner Brothers Recording Studios, North Hollywood, California Mastered by Phil Brown All music and words by Don Van Vliet (not Vleit, as the outside case states!) Note: This album is a very special one. The Magic Band was made up of entirely new musicians with the exception of Jeff Moris Tepper (also Richard Snyder had been on the “final” tour). The first part of the album (ICFC, Ghost, Semi, END_OF_DOCUMENT_TOKEN_TO_BE_REPLACED