Singing Through You DVD 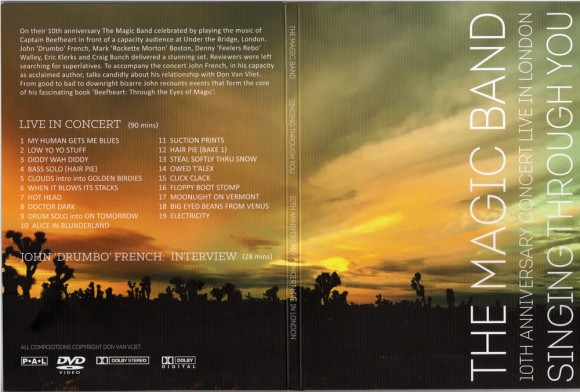 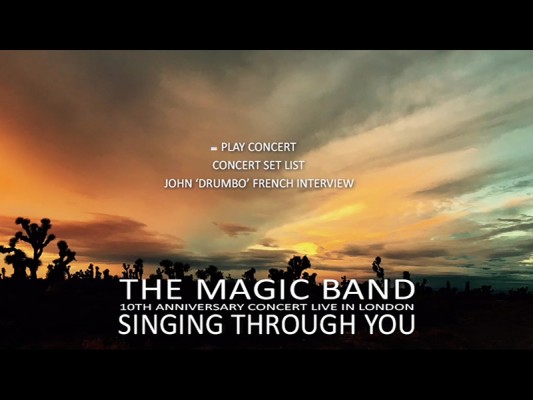 From the sleeve notes:

On their 10th anniversary The Magic Band celebrated by playing music of Captain Beefheart in front of a capacity audience at Under the Bridge, London. John ‘Drumbo’ French, Mark ‘Rockette Morton’ Boston, Denny ‘Feelers Reebo’ Walley, Eric Klerks and Craig Bunch delivered a stunning set. Reviewers were searching for superlatives.

From John French’s note on the DVD insert:

The mood of the audience fed that of the band, the intense rehearsals paid off, and I think we delivered these fabulous compositions with energy and confidence. Afterwards, when the lights were dimmed and the dressing room was empty, I stood there, a bit in awe that ten years had passed. And yet, the music still lived and was as powerful as the day it was conceived. Not a bad investment of time, No, not at all.

A special concert, being a celebration of 10 years together for the reunion Magic Band, at a state-of-the-art venue with its own video recording facilities. This was the last date on the band’s 13 date Spring Tour of 2013 so they were well practised and hopefully not too exhausted.

The DVD includes the complete show … almost. One song, Circumstances, is sadly missing due to an unspecified technical problem. It’s a pity because this complicated song was usually the rousing finale to the first set on this tour. However there are plenty of favourites here to get you jiggling about.

The sound quality is excellent so crank it up and enjoy.

There are excellent visuals throughout. The professional filming from the venue has been cleverly augmented by video footage shot by a couple of fans on the night. These sequences have been edited expertly together by Elaine Shepherd (yes, the same one who did the Artist formerly Known As Captain Beefheart documentary). This gives a great feeling of sometimes being right in there with crowd and works well even though the visual quality is obviously not as good as the professionally shot footage.

Apart from the excellent concert there is an extra feature on the DVD. This is a 28 minute interview John French did at Rough Trade Records as part of the publicity for his book Through The Eyes Of Magic in which he recounts some of his relationship with Don.

Once the concert was filmed it wasn’t immediately certain how or when it might get released as a DVD. However, John was pointed in the direction of the crowd-funding website Indiegogo which provided the means and eventually the funds necessary. Many of the funders who requested it as a ‘perk’ are listed on the DVD insert. Thanks to them this DVD is now available as is Magnetic Draw.

The set list of Singing Through You is significantly different enough to that of Magnetic Draw to make it worth while buying both DVDs. They are not available through regular outlets but can be purchased online through Indiegogo. At least this way the band reaps all the benefits of the sales.

Buy Singing Through You on the Indiegogo site 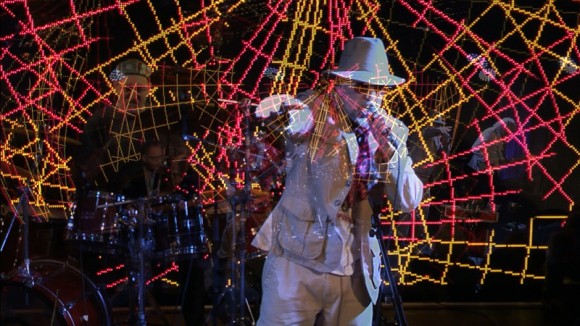