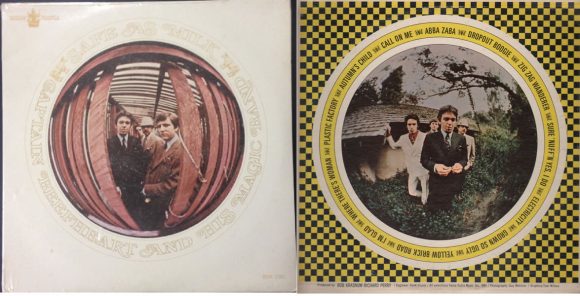 The US release has always been thought to have been in September 1967, but a ‘New Action Albums’ feature in the 19 August 1967 edition of Billboard lists Safe As Milk which may indicate an earlier release date. 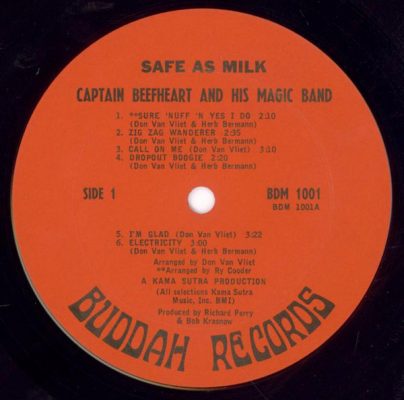 The inner has weird artwork and photos, along with the words “MAY THE BABY JESUS SHUT YOUR MOUTH AND OPEN YOU MIND” and “CAUTION: ELECTRICITY MAY BE HAZARDOUS TO HEALTH” – it also contained the 4″ x 15″ Bumper Sticker folded inside.

Apart from the band, with Ry Cooder pictured separately in profile, Bob Krasnow (plus wife and kids), Hank Cicalo, D.J. Tom Donahue and Richard Perry are some of those also included on the inner sleeve but many of them are unknown characters who may (or may not) have worked for Buddah, one of whom is brandishing a copy of The Beatles ‘Sgt. Peppers’ album (released in June 1967). 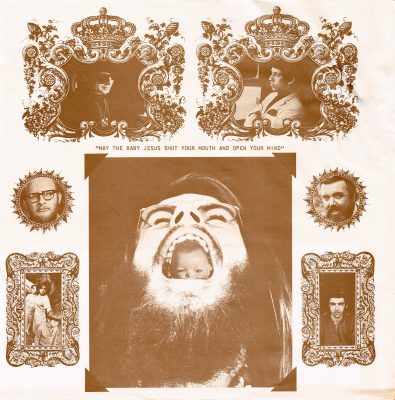 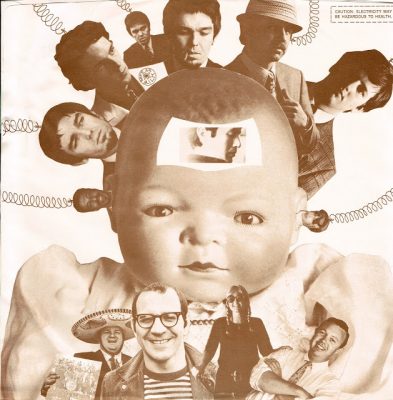 A note about the releases listed above from Chris Perry, with sleeve / label scan: 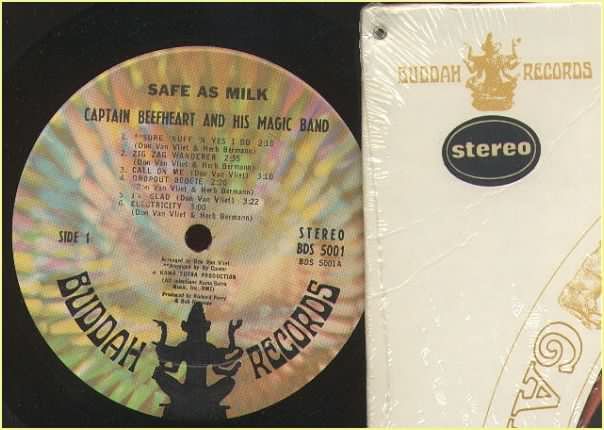 This is a copy of Safe as Milk which I presume to be an original US issue. It is on the rainbow Buddah label, catalog number BDS 5001. There are some peculiarities, however. The record cover lists the mono number (BDM 1001), and the upper left front cover has a sticker indicating “stereo” adhered to it (covering, I presume, the mono catalog number). I purchased this item sealed and am certain the shrinkwrap is original, as it has a ’60s-period price tag from K-Mart on it, indicating a price of “2 for $1”. However, it did not have the bumper sticker or inner sleeve inside when I opened it. My guess is that it’s actually from a second issue of the record, made up from extra parts left over from the initial issue which would’ve included the sticker and inner sleeve. They probably had some mono jackets left over, put stereo pressings inside, and slapped a “stereo” sticker on, long after the bumpersticker supply was depleted. The presence of a cut-out rivet in the cover (visible in the scan) supports this idea. Things like this happened all the time. Not necessarily a true variation, I suppose, but an interesting sub-variation. 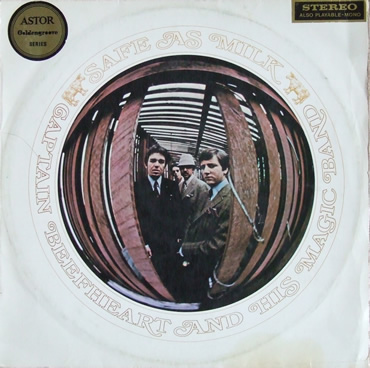 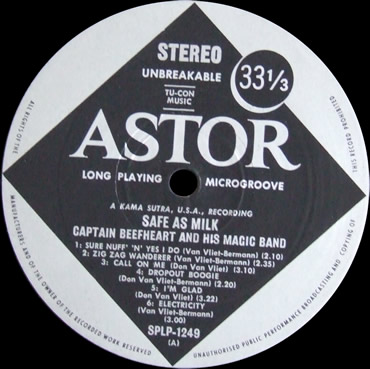 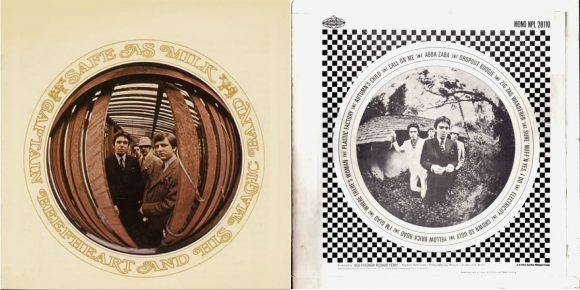 The original UK release was in February 1968. The front cover was more yellow than other releases while the back cover was in black and white. There was no bumper sticker and no weird inner sleeve!

A budget reissue came out in March 1969 with I’m Glad and Grown So Ugly missing. 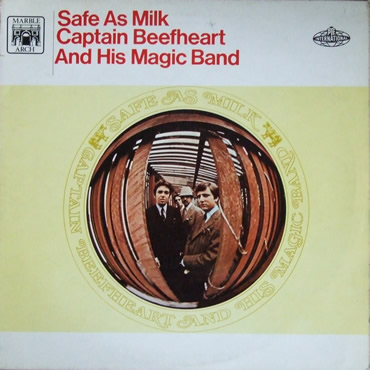 Reissued on the budget 99 label in July 1970 – here is where the repackaging/renaming of SAM started – I guess the weird title Safe As Milk was viewed as a problem by the record companies. 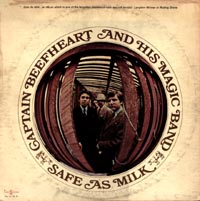 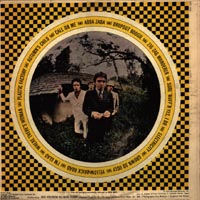 This was the famous Buddah reissue with the Langdon Winner quote about the forgotten classic of rock ‘n roll history from his “I’m not even here I just stick around for my friends – The Odyssey of Captain Beefheart” article in Issue 58 of Rolling Stone featured prominently on the front. Radio plugs were broadcast featuring this quote.

This version had  been remastered in a very unsatisfying way. The lead guitar suddenly disappears during the second stanza of Dropout Boogie and the fade in to Abba Zaba is completely botched. Not as nice as Buddah 5001. 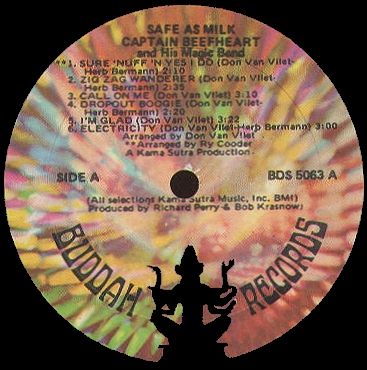 New “chicken coop” cover – rename and redone cover which is actually quite attractive – I guess the photo represented the new title and not the possible environmental concern of the original Safe As Milk name. 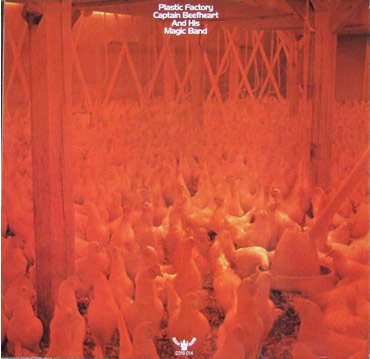 Cover with the Langdon Winner quote. Distributed by Disques Vogue (“Distribution VOGUE P.I.P.”). Vogue factory inner sleeve (made of brown wrapping paper; no plastic; big “Vogue” logo printed on it and tips for careful handling of records). And here’s the best thing about this issue: the record is made of thick red (shine through) vinyl! (Thanks to Sven Kratzsch for the quality photos). 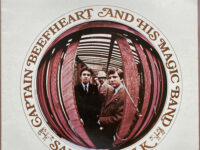 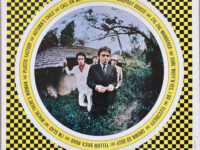 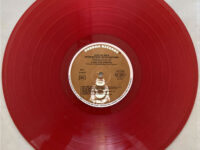 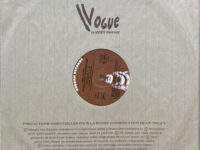 There is also a translucent yellow vinyl version too (Thanks to Claudius Huenerwadel for this information). 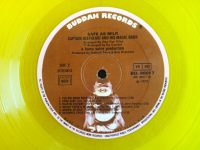 Features the excellent Cannes Beach Publicity Shot from the 1968 MIDEM Pop Festival on the cover. Although it’s the Majic [sic] Band apparently! 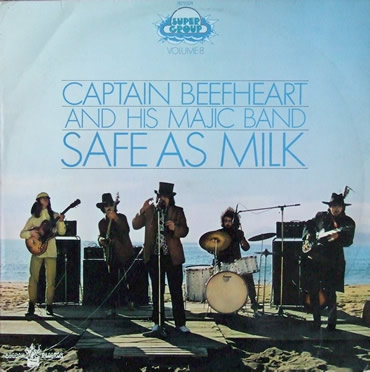 Features a very colourful gatefold sleeve. The banner along the top of the front cover says “Serie Rock Power: La Nueva Genercion Electrica”. The sleeve opens, rather bafflingly, onto a faceless person and an army of marching wooden figures. This is an exetremely rare version (a copy on Ebay in 2002 sold for about USD250). 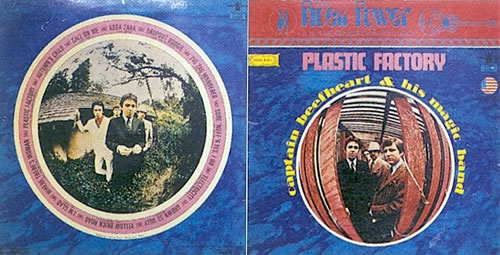 The “the following tone is a reference tone…” piece that usually begins side two is not included on this pressing.

Although the song titles are in English on the cover, on the record labels they have been translated into Mexican. So, we have:

The front cover features a 1972 photo – probably off the German TV Beat Club appearance – and Gold Rock title in photo of embroidery work on gold satin. Back has notes in German covering period up to 1975 and says Im Vertrieb der METRONOME RECORDS Gmbh, Hammerbrookstrasse 73, 2000 Hamburg 1 * Made in W.-Germany 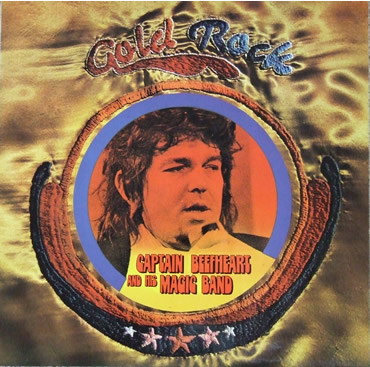 Licenced by Precision Records and Tapes Ltd. Made in England

Cover as US with Vervaardigd in licentie door N.V.Bovema on back bottom right. Note that number is the same as US original release with H (=Holland?) added.

The text of an article printed in this release is available.

Also includes all of the I May Be Hungry… outtakes minus Safe As Milk take 5 and Flower Pot. The front cover is faithful to the original (see scan of CD back cover, below): 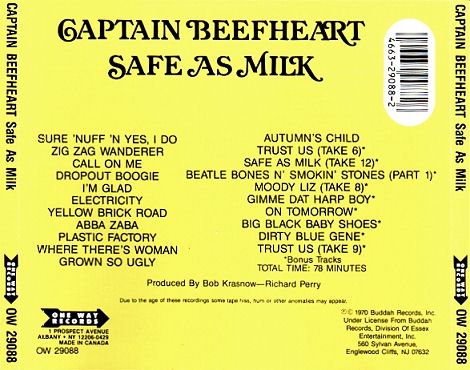 Featuring six Mirror Man out-takes which were previously available on I May Be Hungry But I Sure Ain’t Weird, and also Korn Ring Finger, never before available.

A reissue of the remastered 1999 version complete with extra Mirror Man out-takes at a nice price.

A reissue of the remastered 1999 version with Mirror Man out-takes but packaged as a mini LP. The thick card cover includes the picture inner sleeve and a mini version of the bumper sticker. Also comes with a booklet with an article in Japanese plus lyrics to all songs in Japanese and English. To my ears the sound of the CD is even better than the 1999 Buddha issue. 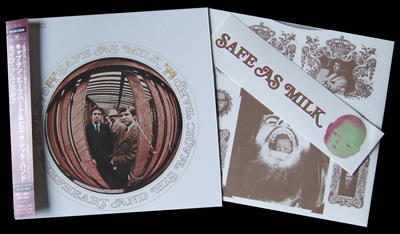 This is also available as a ‘Promo Box’ which includes the Mirror Man mini LP as well as a chunky box packaged to look like the original SAM release to keep both albums in: 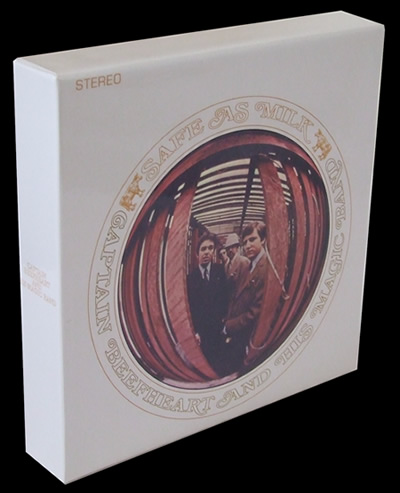