By: Derek
In: In the press, Music, Tenuous, Tributes
With: 3 Comments

Captain Beefheart at The White House

The next time you’re visting The White House please do have a glance at your hosts vinyl record collection. According to Rolling Stone magazine The White House Record Library includes at least one Captain Beefheart album, Trout Mask Replica. Whether The White House copy of Trout Mask has ever been played, or whether the collection has been added to since 1981 is not mentioned.

Noel Fielding of Mighty Boosh has reportedly bought his parents a painting on canvas by Don Van Vliet. The Sun newspaper writes that he paid £23,000 for the work, whose title is not disclosed.

A re-issue of Hot Rats on 200g vinyl is out now. According to Classic Records, who are issuing it, this release is mastered and cut directly from the original analog master tape.

I’m told by Mike that there is a 9 page article about Captain Beefheart in Record Collector magazine for February 2009. It seems that there is input from John French and Gary Lucas, and there is mention of a CD reissue of Safe As Milk by Rev-Ola.

I got a brand new Cadillac, I got a Ferrari too… 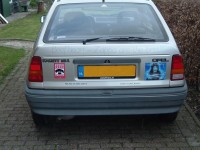 …but click on the picture here for a magnified view of the customised backside of Gerard’s Opel Kadett.