The search for the mystery co-songwriter from ‘Safe As Milk’

Of the 12 songs on the ‘Safe As Milk’ album 8 are co-credited to someone called Herb Bermann. Who was he? No-one at the time seemed to know, he wasn’t a member of the band, he didn’t co-write any songs on the following albums and he was never mentioned in interviews. Very strange. Some fans thought he may have been an anonymous staff-writer foisted on Beefheart to keep the lid on his eccentricity … or, maybe, he was a friend of the producer or an agent getting a cut of the royalties.

Then when ‘Shiny Beast’ was released in 1978 there he was again as co-writer of ‘Owed T’Alex’. Although some thought Don had been working with this mystery man again, the most likely scenario was that this was a song written almost ten years previously alongside those ‘Safe As Milk’ tracks.

Despite Bermann’s name reappearing nothing new was found out about him. As years went by little more came to light. In fact, some people close to Beefheart during the ‘Safe As Milk’ days even suggested that Herb Bermann was an invention of Don’s and didn’t exist. This did seem to be a possible option as nothing could be discovered about him … not even a mention on the internet (apart from a New York artist called Herb Berman – one ‘n’!). He just seemed to have disappeared between the cracks of rock music history.

So, was Herb Bermann some sort of bizarre joke on Don’s part? Without other evidence of his existence this was beginning to seem the most likely case.

Then, sometime in the late 1990’s I was reading a book about Neil Young and came across an interesting piece of information. Young’s classic 1970 album ‘After The Goldrush’ had originally been based on a screenplay given to him by the actor Dean Stockwell who, it said, had written it with someone called … Herb Bermann!

Now, Young, Stockwell and the action in the proposed film were all connected closely with Topanga Canyon in Los Angeles. Beefheart’s stamping ground was LA too, so surely there was a possible connection and this was the same person? Was I clutching at straws? Either the coincidence was just too great to ignore or this joke was taking on a strange life of its own.

However, the trail went cold again. Still nothing would turn up about Herb Bermann, and other books about Neil Young didn’t always mention Bermann as co-writer of the screenplay. This was beginning to get very frustrating!

Then a breakthrough in the search for information came in 1998. I made email contact with a guy called Don Aldridge, who had lived in Lancaster during the 60’s and had hung out with Don Vliet. He was initially helping out with some background information about Jeff Cotton, but I began asking wider ranging questions and decided to ask if he could throw any light on the mystery man – Herb Bermann. This is what he told me:-

He definitely existed, and I knew him. Don has been quoted as saying that Herb came on at the request of Buddah Records. I don’t believe it, and Don did not tell me that at the time. Herb pre-dates Buddah, as do the songs, as far as I can remember. Now, someone may have suggested Don use him, but the way Don was acting at the time, you’d have thought Berman was the ‘Second Coming.’

Here’s what I saw: One night I came in from work and dropped by Vliet’s which was my usual habit. As I walked into the room I was greeted by Don and introduced to a middle-aged, whispy-haired guy with a beard, and the foxiest ‘old-lady’ (as we used to say) you’ve ever seen. She was about half his age. Remember, I was 19, so he may not have been as old as he seemed at the time – fortyish I would say. Don introduced him as Herb Masters. It was later I discovered his real name was Bermann. Vliet thought it was to cover the fact that he was Jewish. I doubt that. In those days everyone was changing their names, including Snouffer to St. Claire. Anyway, Don called the guy ‘The Poet’. For a while he was positively gagging us all out with it! ‘The Poet said…’ or ‘The Poet is HEAVY, man!’ I mean none of us could believe it. Alex sat in the corner watching with a sardonic grin. I had never seen Vliet act this way. You’d have thought Salvador Dali had walked in!

In the end most of those tunes were at least Don’s ideas. Some I heard prior to Berman’s arrival. For instance, ‘Plastic Factory’. Anyway, I think history has proved that Vliet didn’t need a co-writer. Herb vanished almost as quickly as he appeared. I don’t claim to be privy to everything that went on regarding him, but I don’t believe Buddah was involved.

At last! Someone who had met Bermann. So maybe he wasn’t a figment of everyone’s imagination. Then I had another piece of evidence. It was also about this time that I did a search on the BMI website and found an entry for a writer called Herbert Fred Bermann (also listed as Herb Masters). He had the following songs under his name:-

Here we have all the songs Bermann co-wrote with Don, plus one as yet unreleased song called ‘Can Fever’ * (which is also listed under the entry for Don Glen Van Vliet). At this point I was pretty much convinced Herb Bermann was a real person, but who was he and where did he disappear to?

Why hadn’t a music journalist tracked down Bermann to get a different angle on the Beefheart story? I always thought this was odd, and it did give more credence to the theory that he didn’t exist. But no one seems to have tried until 2000 when Susan Bunn, a staff writer on the Malibu Times spoke to the man himself. The resultant interview appeared in the 6th July 2000 edition of the paper. Presumably, she was prompted by the release of the remastered ‘Safe As Milk’, but whether she was a Beefheart fan and how she came across Herb Bermann I have no idea. This is what Herb Bermann had to say:-

Captain Beefheart and I hooked up in 1966, I was a poet. I was an actor on the run. I had done Kildare and Asphalt Jungle, the TV series, and I decided I could write. I lived on the Sunset Strip where the best music was happening. As all writers do, I had a trunk of fragments of work and poems and inspirational whatever.

[note: The Asphalt Jungle ran during 1961; Dr Kildare from 1961-65 (which Dean Stockwell appeared in). I was unable to find any mention of Herb Bermann – or variants – on the cast lists for these shows, so presumably he only had bit parts … or maybe used a different stage name.]

Bermann seems to have identified himself with the beat poets and saw what he was doing as an attempt to change the world for the better, which many people did at that time against the backdrop of the Vietnam War. He also thinks that the sixties produced some of the best songwriting in the US. Unfortunately there are no examples and this thread is not pursued in the interview, although he goes on to say

I’ve collaborated with a lot of other artists and bands since then. It’s been satisfying but we never reached this level.
[by which I think he means the Safe As Milk songs]

The ‘After The Goldrush’ screenplay never made it but some of his other efforts were filmed. One in particular, ‘The Psychiatrist: Par For The Course’, was a Sunday night mystery movie on NBC for Universal about a terminally ill golfer struggling to break the news to his family. It won Bermann a Writers Guild Award and apparently portions of that script were recorded for the Library of Congress, and influenced a pilot program in oncology to help terminal patients and their families.

The only other writing credit I have found for ‘Herbert Bermann’ was for a 1976 episode of ‘Wonder Woman’ called ‘The Pluto File’. He is a member of the Writers Guild of America.

He lived in the artistic enclave of Lower Topanga Canyon from the 1960s, but was relocated when the State Parks bought the area and evicted all those living there. In November 2003, and February 2004, he did a reading at an event called “Idlers of the Bamboo Grove: Poetry from Lower Topanga Canyon” which celebrated the idyllic bohemian lifestyle of Lower Topanga with poetry and live music.

It was this poetry reading and the subsequent book of verse that, finally, brought the search for the elusive mystery man of ‘Safe As Milk’ to an end. Derek Laskie was able to make contact with him and secured an extensive and exclusive interview for the Radar Station:

Watch Herb Bermann on You Tube reading his poem ‘Colophon’:

* The song ‘Can Fever’ and another called ‘Bone Crazy’ listed as Bermann and Vliet compositions were a mystery for a time. This has now been solved – they are not hitherto unknown Beefheart songs. See this entry on our Beefheart Connections page for the full story.

Brass Tacks Press have also added a picture of Herb then and now to their MySpace page: 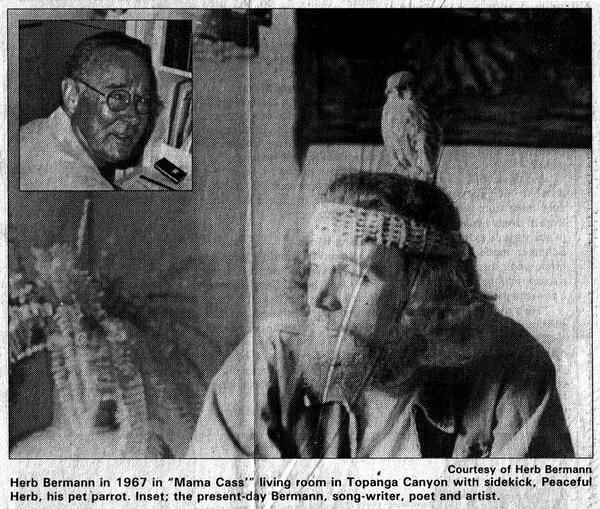