Captain Beefheart and his mother, an elf or a freak, and the plastic, horned devil

By: Derek
In: Tributes
With: 2 Comments 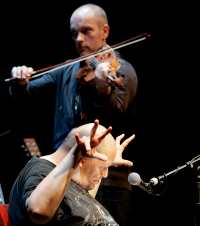 The singer Freddie Wadling lay hyperventilating and nearly unconscious in the emergency room of Stockholm’s Sabbath Hill Hospital. His blood pressure was down and his stomach was as hard as a board. To Johan von Schreeb, a dark-haired surgeon with an eye of glass, Freddie’s symptoms were classic and life-threatening. Freddie had a burst stomach ulcer which had to be operated upon immediately or he would die. But Freddie’s wife Bella, who was present in the hospital, saw von Schreeb as a stranger in a white robe who wanted to stick a knife into Freddie. She refused permission to operate.

Von Schreeb had seen Freddie perform and he owned several of Freddie’s records (many visitors to this website will know Freddie’s vocals on the CD ‘The Music of Captain Beefheart – Live’). While Freddie was being stabilised in Intensive Care, von Schreeb remembered reading a newspaper interview where Freddie was asked who was his role model. His answer was Captain Beefheart’s mother.

Von Schreeb decided to use a ruse to save Freddie’s life. In the presence of Freddie and Bella he answered a telephone call which he told them had come from Captain Beefheart’s mother. Beefheart’s mama had said it was OK that Freddie be operated on. From somewhere between sleep and wakefulness Freddie nodded. Bella gave her permission and the operation went ahead.

The Swedes don’t seem to know how to regard their enigmatic Freddie. A 1999 documentary film labelled him as being one of the elf family, ‘Freddie Wadling – en släkting till älvorna’. A brand-new biography of Freddie is entitled ‘Freak’. Defying description, Freddie has just been feted in his homeland by being awarded the 2005 Cornelis stipend. This honour carries a 250,000 kroner purse which Freddie, the most pragmatic of national treasures, promptly announced that he would use to pay off his debts.

While the film seemed happy to indulge the mythology surrounding Freddie, the book promises to unravel some of the myths. It should be interesting to read what the author, Robert Lagerström, who has known Freddie for more than twenty years, makes of his subject.

Whether he is an elf or a freak or something else entirely it must be rather hard to classify a man who says that he dreams in opera, who began to sing the lyrics of Shakespeare’s contemporary John Dowland only so that he could afford to drink and who is as skilful in singing Kurt Weill or Swedish murder ballads as he is in interpreting the lyrics of children’s author Astrid Lindgren (not to mention those of Captain Beefheart).

Freddie’s musical roots are punk – he sang with The Leather Nun and Liket Lever and he has since worked with some of the most talented Swedish musicians – Cortex, Fleshquartet, Henryk Lipp (in Blue for Two) and Nina Persson for example. He played the monster in a musical production of Frankenstein and has released many solo albums, most recently 2005’s EMI/Capitol CD, ‘Jag Är Monstret’.

Freddie also writes his own lyrics, “grotesque with humour” as he describes them. He compares Beefheart’s writing with James Joyce’s, as breaking all the rules but containing something recognisable. He first heard Beefheart in 1966 and was immediately drawn to the unique voice and the unusual kind of music.

As for his feelings for Captain Beefheart and his mother, Freddie says this in the documentary film:

“I have never had anyone that could give me advice, anyone I could depend on. The advice which my mother gave me proved to be totally lying. I got an idea that Captain Beefheart could depend on his mother, that they had a relationship in which they were honest with each other. He tended to ring her up in the middle of the night. He’d pull out his old soprano saxophone and pull off some twenty minute long avant-garde solo, right down the receiver.

A full account of Captain Beefheart’s mother’s telephone call to Freddie’s bedside is included in Robert Lagerström’s book ‘Freak’. To me this seems an archetypal story, a myth worthy of the name, and one which could give a new slant to the term Rock God.

Captain Beefheart’s mother interceded at Sabbath Hill to save Freddie’s life. Did Freddie interpret this in a religious way? What would this make Don Van Vliet? Was “a toast to the ghost, the most holy-o”, called for?

Robert Lagerström told me that Freddie has very complex beliefs which he found difficult to understand. He wrote, “He believes in anything that suits him, from kabbalah and I-ching to sungods and ghosts.” The last two lines of an online interview with Freddie Wadling here seem to support this statement.

Freddie Wadling has recorded a lot of songs, often in English. He has the face of a baby and the voice of an angel. Check him out.

Samples of two of his tracks from ‘The Music of Captain Beefheart – Live’ are here. As Freddie said, “It’s actually the only record with myself I can listen to.”

Thanks to Robert Lagerström for finding time to reply to my questions about Freddie Wadling during the busy launch period for his book ‘Freak’. The book, Sweden’s first rock biography, is available from the publisher Reverb who kindly provided me with some extracts from it. Thanks also to Cecilie who explained the language used in the book and in the film. Any clumsiness or error in the English renditions is mine alone.